In this post, we start (finally) with the first lines of codes. We set up the skeleton of the Rolly Bear World Game. With this I mean the navigation between the different screens (home or menu, level selector, options and the game credits). To get this fixed, we use something (very useful) called the storyboard API/Library of the Corona SDK, which pretty much does all the work for us.

Currently I’m still in Nepal. I just really enjoy Nepal. The people and food are amazing. Despite this we decided to fly next week to Indonesia to see some of the Islands. We booked a flight to the island Lombok. Today we visited the Peace Pagoda which is a temple on top of a hill in Pokhara. The peace pagoda is a buddhist stupa. This one was build by Japan to widespread the peace message after the horrible bombings in Japan by the end of the 2nd World War. Besides Japan there are Peace Pagodas all over the world eg in India, Japan, Australia, Africa and even in California!

END_OF_DOCUMENT_TOKEN_TO_BE_REPLACED

I was thinking it would be useful to dedicate a post on the tools and resources I’m using during my trip to create Rolly Bear World. From all the tools I use I can group them into developer tools, graphical programs, books and other learning resources and finally apps.

We are currently still in Pokhara, Nepal. We are planning to leave monday for Bhaktapur which is near Kathmandu. We decided to stay longer in Pokhara, mainly because it is so peaceful and beautiful. Yesterday morning we hiked at 4:00 AM to a small village in the mountains called Sarangkot to see the sunrise. 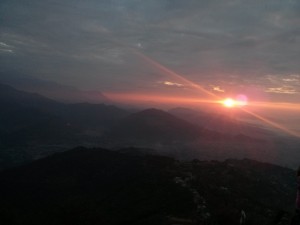 END_OF_DOCUMENT_TOKEN_TO_BE_REPLACED

This already my third post. At this stage the game already starts to get some shape by some early sketches. I decided to make some high level sketches to get a better feeling of all the elements which should be developed and how the game and different screens should look like. With user stories I tried to specify the most important user requirements, they are not complete in terms of specifying the complete functionality but provide a fairly good overview over the different features of the game.

We are currently in Pokhara, Nepal, which is compared to Kathmandu a very chilled out location close to the Himalayan mountains. Many people come to this place to enjoy the lake called Phewa Lake or hike the Annapurna Circuit. I you read my previous post, we had to escape from Kathmandu due to the elections. It became quite dangerous in Kathmandu with the Army being deployed all over the city and some gas bombs being thrown on busses and cars. In Pokhara, it seems that the country has no elections at all, making this place an excellent alternative for Kathmandu. Besides some hiking and mountain biking I hope to make some progress on Rolly Bear World.
END_OF_DOCUMENT_TOKEN_TO_BE_REPLACED

In the last couple of days I have giving it more thought what game I will be developing during my travels. In this post I will introduce high level the idea of the game, the game character, and my first thoughts about the game play.

We are currently in Kathmandu in Nepal. It took is over 30 hours to get here but it is absolutely a beautiful country and the people are very friendly. We visited Patan, which is an Unesco World Heritage site full of temples. We will spent 5 days in Kathmandu before we head out to Pokhara which is east of Kathmandu. Kathmandu was quite chaotic as the elections are planned for the 19th of November. Some of the members of certain parties were throwing gas bombs on cars and streets. Our hotel recommended not to take any bus to Pokhara, as they will be escorted by the army or police. We changed our plans and decided, given the unsafe environment, to book a flight from Kathmandu to Pokhara.

END_OF_DOCUMENT_TOKEN_TO_BE_REPLACED

Thank you for visiting my site. I lived in Amsterdam and really enjoyed living in the Netherlands. But since a year my wife and myself have decided to go for a change in life. As such, we have started 12 months ago the emigration paperwork to get a Greencard for the United States.

I have been a product manager in mobile services for about 6 years and I have always been excited about  Silicon Valley and being part of the action :). So we have decided to quit our jobs in the Netherlands and plan for a big move to the Valley.

We had both employers which are not located in the Bay Area, I worked at Vodafone and my wife at MTV Networks. So we took the bold step to quit our jobs and pursue a new start. Just to be clear we didn’t hated our jobs or we weren’t stuck in our careers. No, we both liked our jobs very much, we just wanted something different, something new, and something exciting.

At this moment we left our jobs, our apartment and our life in Amsterdam and we are enroute to California. Going through this decision gave us the realization to pursue another dream. We both love to travel and experience different cultures and countries (we actually met in Finland a few years back). So we decided not only to emigrate to the US, but also take this moment in our lives to travel for six months through Asia.

In the next one or two weeks we will board our plane to Nepal, this will be our first destination. We have an idea of the countries we want to visit, but we rather keep things open and see where we end up during these six months.

Being on the road for 6 months, I will get some moments that I rather have something else to do. Therefore I decided to have a side-activity along our travels. In the last years I have self-taught myself to code. I started with Java and Android, and for the people who are following me for a while, probably noticed that I recently started to learn Lua and Corona SDK. One of my problems in the last years was that it was difficult to have focus on one project as I had only a few hours per week to work on my hobby projects. Since I will be travelling in the next months I came up with the idea to create a mobile game in the six months we are traveling in Asia.

In the next posts I will explain what mobile game I will develop and what exactly the gameplay will be. But I have already decided to create a physics based game and to call it Rolly Bear World (more in the next posts). As six months is also a short time to develop a mobile game, I will try to plan a bit ahead by creating some high level requirements. I want to keep the creativity part of the process, but having outlined the scope of the game to some extent will actually help me to succeed in the goal to develop a game in this time frame.

I have “rebranded” my blog into “code and travel”  to capture what I will be doing in the next few months. I hope you like it, beside the code tutorials, which I will be sharing along the development of Rolly Bear World, I will also share some of our travel photo’s and stories. All the existing tutorials are still available for you, just use the navigation on the top of this page.

Throughout my travels I will update my site with my progress but will also share all the code so you or other people can take the code and use it for your own.

So the goals for Rolly Bear World are:

Keep following me for updates! It’s gonna be a lot of fun!

In my previous post I showed you how you can make a level selection template in Corona SDK. In that example you could select different levels from a gridview and each level had a state: open, locked or completed. In this post I extend the template to also save the progress of the player. That way, when the user returns back to the game the states of each level are retrieved from the local storage.

END_OF_DOCUMENT_TOKEN_TO_BE_REPLACED

In this tutorial I show you how you can use TexturePacker to create a sheet and use the PhysicsEditor to use the same sheet to create an animated sprite.

See the video above. An Notice the Hybrid mode run as well with Corona’s Physics Engine.
END_OF_DOCUMENT_TOKEN_TO_BE_REPLACED

In the last couple of days I have tried to create some kind of template for level selection for games build with Corona SDK. This template is a level selection which you often see in mobile games. The user can select a level based on a grid outline and based on the status of the level the grid changes (open, locked or completed).

In the video below you can see what the template is.

END_OF_DOCUMENT_TOKEN_TO_BE_REPLACED 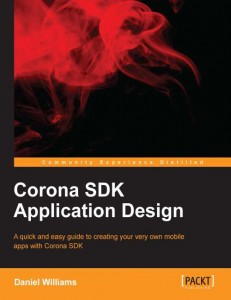 When Packt Publishing asked me to review the Corona SDK Application Design book by Daniel Williams I was more than happy to read this book. Actually, I had been staring at this book before on the Amazon site; wondering to buy or not to buy. After reading the book I was positively surprised.

Let me start with with the most surprising part, Daniel Williams succeed to explain the basics of the Corona SDK in only 98 pages, which is a perfect size if you want to get more acquainted with the Corona SDK platform before starting a complete study out of it, and reading long introduction chapters before the exciting parts start. So in case you are not sure if you like Corona SDK or if it will fit your development needs, the Corona SDK Application Design book is a good choice. Having said that, as the book is relatively small in size, this book is not very suitable, if you’re looking for a complete reference guide.

END_OF_DOCUMENT_TOKEN_TO_BE_REPLACED

I the last days I have been looking how to include a custom font within my game with the Corona SDK. Its pretty easy but it took my some research to find out how to do it. In this short post I will show you how can include custom fonts. First I downloaded a free custom font via http://www.1001freefonts.com/bitmap-pixel-fonts.php